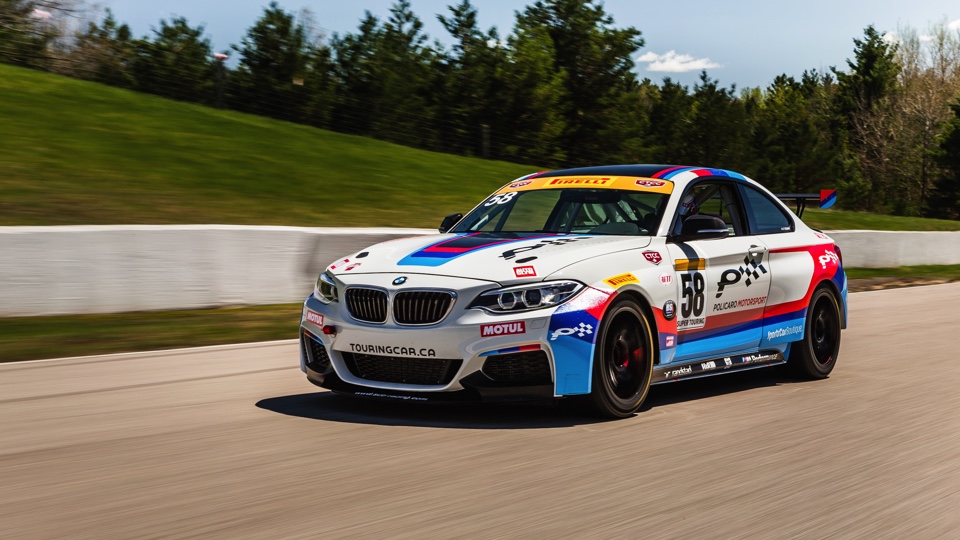 Two event weekends into the 2017 Canadian Touring Car Championship (CTCC) season and Policaro Motorsport has set its sites on the top.

Led by drivers Jeffrey Kingsley and Nathan Blok  in a pair of 2017 BMW 235i R’s from Policaro BMW, the team completed a couple of great races at last weekend’s two-day event at Calabogie Motorsports Park (CMP) in Ottawa.

Kingsley’s Saturday race got off to an interesting start when, after a fourth-place qualifying run, he was forced back to fifth position immediately after the green flag. But he was able to claw back two positions, passing a BMW and Porsche, and defend a third-place finish, with teammate Blok, who has home-court advantage at Calabogie, clinching second.

Bringing home some hardware in the #16 SportsCarBoutique / Policaro BMW

“That was Nathan’s home track,” says Kingsley. “He’s done over 3,000 laps there, whereas it was my first time on the track last weekend. So, I got his help in understanding the track; it definitely helped get me up to speed quickly.”

On Sunday, with a few track laps of his own under his belt, Kingsley qualified fourth once again, with Blok slipping back to seventh starting position in qualifying. But both would climb.

“That was a tough race for me,” says Kingsley. “At the start of the race I had my traction control turned back on, so when the wheels started to spin a little in the corners it cut out the engine and stopped acceleration. Because of that I was trying to get on power out of the corners and the engine was cutting out–I had no acceleration power and other cars were just blowing by me.

After falling back to eighth position and eventually getting his traction control back to the proper setting (there’s no display for this in the track cars), he was once again able to make ground, providing quite an exciting race for fans.

“There were just battles the whole time,” says Kingsley. “Each driver I had battles with over maybe two laps each–I’d pass them, then they’d pass me back on the straightaway, then I’d have to dive-bomb them in the corners to make sure the pass stuck.”

Then, with two laps to go, Kingsley made his final pass for second position, with just his teammate Blok ahead of him.

The next race will take place at Circuit ICAR in Quebec on July 8.

“Hopefully the next weekend at iCar we can grab a first-place finish and put Policaro BMW on the top,” said Kingsley. “That’s the goal.”